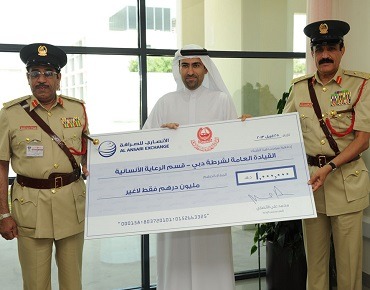 Al Ansari Exchange, a UAE-based foreign exchange and worldwide money transfer company, has donated AED 1 million to the Humanitarian Care section of the Department of Correctional and Punitive Institutions at Dubai Police. The donation is to facilitate the financial settlements of more than 160 prisoners who have completed their sentences, but remained in detention due to their inability to pay imposed fines and debts. The initiative targets financially incapable inmates and the cases of diya, or ‘blood money’, for prisoners who have been pardoned but are unable to pay, as well as the payment of return tickets for prisoners awaiting deportation.

The donation was received by H.E. Major-General KhamisMattar Al Mazeina, Dubai Police Deputy Commander-in-Chief, from Rashid Ali Al Ansari, General Manager, Al Ansari Exchange. H.E. Major-General Al Mazeina commended the efforts made by national organizations and associations such as Al Ansari Exchange to establish social solidarity and contribute to the development and social objectives of the UAE,and expressed hope that this initiative will be an inspiration for other organizations to be part of the humanitarian efforts.

“As a successful example of long-term synergies between the private sector and society, this initiative is poised to promote the spirit of cooperation across society and encourage positive interaction among all community members,” said H.E. Major-General Al Mazeina. “We thank Al Ansari Exchange for their efforts to help release pardoned prisoners and for their social contributions to nationals and residents in the UAE. I call upon all members of society to extend their support to the inmates in need and understand their financial situations that are keeping them behind jail even after completing their sentences.”

Rashid Ali Al Ansari, General Manager, Al Ansari Exchange, said: “Our initiative aims to settle prisoners’ accounts and help reestablish them as effective members of society, while also taking the load off the General Administration of Punitive Institutions. We commend the Humanitarian Care Section of Dubai Police for their cooperation and commitment to opening a window of hope into a better future for inmates and helping settle their financial problems. Our initiative is part of our duty and policy aimed at achieving social and financial solidarity among Emirati nationals and residents, in line with the wise vision of our country’s leadership towards community engagement.”