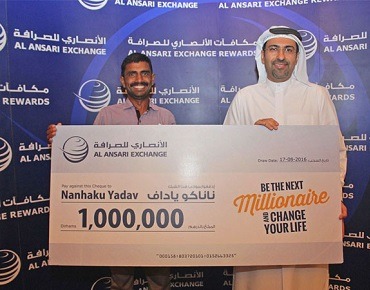 Al Ansari Exchange, the UAE-based foreign exchange and worldwide money transfer company, has announced the name of the third millionaire of ‘Al Ansari Rewards – Summer Promotion 2016’ which was held from June 1 to July 31, 2016. During a glittering ceremony held today (Wednesday, August 24, 2016) at the Dusit Thani Hotel in Dubai, the company declared the name of the new millionaire along with 22 other winners.

Nanhaku Yadav, an Indian national, is the winner of the AED 1 million grand prize. Married and a father of three, Yadav came to Dubai in mid-2012 to work as a construction worker for a meager monthly salary. The 36-year-old had no idea that his remittance of AED 1,116 to India, would be a turning point to fulfill his dreams of comfortable life and promising future for his family. Mixed emotions of joy and amazement were drawn on Yadav’s face while receiving the Grand Prize.

Rashed Ali Al Ansari, General Manager of Al Ansari Exchange, extended his best wishes and congratulations to the winner of the Al Ansari Rewards – Summer Promotion 2016. He said that the company is pleased to play a significant role in changing the lives of the grand prize winners for good. He added: “Every year, we add a new winner to the list of Al Ansari Exchange Millionaires and observe how their lives change as a result. This event has become a widely anticipated one among a large segment of our customer base and this motivates us to continue with the millionaire promotion every year. We always aim to have a high level of engagement with our customers who have always been the pillar of our success as a service provider.

Commenting on his win, Yadav said: “I had always looked to the UAE as a country of dreams, aspirations and promising opportunities. However, I had never expected to be one of the millionaires overnight. Honestly, I didn’t know how much AED 1 million is in Indian Rupees, it is a really big amount. I would like to extend my sincere thanks and appreciation to Al Ansari Exchange, for providing this opportunity for me to achieve more than what I had dreamt of. The grand prize will help me start a new life with my family that is bright and prosperous and give my children a better education. I urge all Al Ansari Exchange customers to continue to participate in their numerous promotions and offers to increase their chance of winning and getting the opportunity that changed my life forever.”

The gala ceremony for Al Ansari Rewards – Summer Promotion 2016 also included the distribution of AED 100,000 cash prizes to 22 winners from different nationalities including India, Philippines, Bangladesh, Pakistan, UAE, Egypt, Jordan, Canada and the UK across all Al Ansari Exchange branches in the UAE. This year’s campaign was widely participated in by customers who were eligible for the draw to win cash prizes through domestic and international transfers, foreign exchange transactions, purchase of National Bonds, and payment of travel tickets for Air Arabia or FlyDubai, or cash withdrawals via credit cards from any of Al Ansari’s 170 nationwide branches.