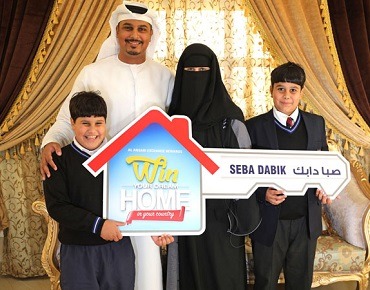 Al Ansari Exchange, the UAE-based foreign exchange and worldwide money transfer company, has unveiled the winners of its Winter Promotion 2016 under the theme ‘Win Your Dream Home in Your Country’ held from November 1 to December 31, 2016. Mrs. Seba Dabik won the Grand Prize of a ‘dream home’ worth AED 400,000. Gold coins were given to 50 other winners.

Rashed Ali Al Ansari, General Manager of Al Ansari Exchange, said: “We always strive to launch promotional campaigns that contribute to making a difference in the lives of our loyal customers and help them fulfil their dreams. We congratulate Mrs. Seba Dabik for winning the 2016 Winter Promotion and become the first woman to win the Grand Prize as well as applaud the winners of the gold coins. We will continue to provide the best offers and rewards to our customers of different nationalities in recognition of their continued loyalty and support.”

“I am highly delighted to win the “Dream Home” Grand Prize from Al Ansari Exchange which I plan to use to purchase a house in Al Ain. I want to thank Al Ansari Exchange for giving me the wonderful opportunity to win a coveted prize which has been a dream of mine,” concluded Seba Dabik.

The Winter Promotion 2016 offered an exclusive Grand Prize under theme ‘Win Your Dream Home in Your Country’ along with 50 gold coins for 50 lucky winners. This year’s Grand Prize was chosen to match client needs as owning a house is the topmost priority of most of Al Ansari Exchange’s customers. All transactions, including money transfers and eExchange; purchase of foreign currency, National Bonds and First Saving and Al Awwal Islamic Certificates worth more than AED 1,000, travel cards and reloads; and payments for Air Arabia and Fly Dubai tickets, credit cards, and tourist visas qualified for the draw. All corporate or cancelled transactions were excluded.