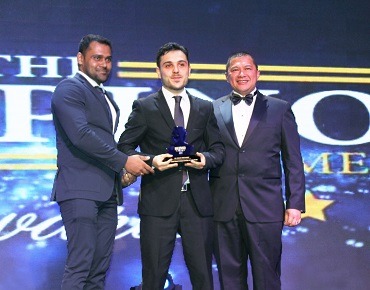 Al Ansari Exchange, the UAE-based foreign exchange and worldwide money transfer company, has been named as the ‘Preferred Remittance Centre of the Year’ at The Filipino Times (TFT) Awards 2016. TFT Awards aims to recognize the most influential brands amongst the Filipino community as well as acknowledge the brands that Filipinos love the most. Husam Mahmoud, Marketing Manager at Al Ansari Exchange received the award during a gala event in Boracay, Asiana Hotel in Dubai.

Al Ansari Exchange emerged once again as the most preferred remittance center among Filipinos in the UAE after initially being nominated through a public survey conducted by TFT, a leading Dubai-based Filipino weekly newspaper in the UAE and also the organizer of the awards, on its website from June 30 to July 28, 2016 while the public voting for the most preferred brands took place from July 31 to August 11, 2016.

“We are truly honoured to be chosen once again by the Filipino community as their preferred remittance partner. Receiving the award for the second time only shows the trust of many Filipinos to the quality of our services. We are very much aware about the important role we play in their live here as overseas workers and to their families back home. This recognition only inspires us to continue providing the most efficient way to better serve every Filipino customer in the UAE.” said Husam Mahmoud, Marketing Manager at Al Ansari Exchange.