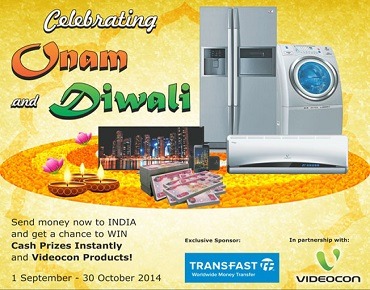 Al Ansari Exchange, a UAE-based foreign exchange and worldwide money transfer company, has announced the launch of India Promotion 2014—falling in line with the festive occasions of Onam and Diwali, two of the biggest festivals in India. The promotion, which will run from September 1, 2014 until October 30, 2014, will have more than 500 guaranteed winners.

During the two-month promotion, all remittances made to India will be automatically qualified to enter into an on-the-spot draw. Cash rewards worth thousands of Dirhams will be instantly given to lucky winners during their transaction on the counter at any of the Al Ansari branches in the UAE. In addition, the lucky patrons will stand a chance to win exciting electronic products from Videocon, which will be delivered free of cost in India.

Bassel El Bakkar, Marketing Manager, Al Ansari Exchange, said: “Over the years, Al Ansari Exchange has witnessed an increase in remittances to India during Onam and Diwali as they are among the biggest festivals for Indians. Therefore, we have launched our latest promotion to coincide with these festivals so that these celebrations become even more special for our Indian customers.