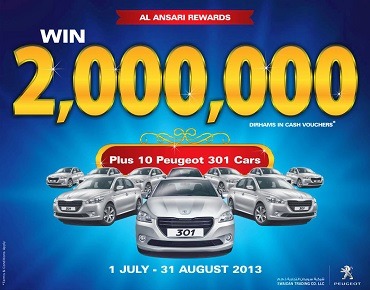 Al Ansari Exchange, a UAE-based foreign exchange and worldwide money transfer company, has launched the “Al Ansari Rewards – Summer Promotion 2013”, with AED 2 million in prizes plus 10 brand new cars to be won by customers. A total of 200 customers will win cash prizes, while 10 more winners will each win brand new Peugeot 301 cars.

The Al Ansari Rewards – Summer Promotion 2013 will run from July 1 to August 31, 2013, with the grand draw on September 3, 2013, in Dubai. Al Ansari Exchange further revealed that “Worldwide Cash Express” transactions will qualify as double entries, giving customers more chances of winning. The promotion is supported by Alawneh Exchange from Jordan, National Bonds Corporation and Swaidan Trading, the authorised distributor for Peugeot in Dubai and the Northern Emirates.

Rashed Ali Al Ansari, General Manager, Al Ansari Exchange, said, “The Al Ansari Rewards – Summer Promotion has become one of the most anticipated rewards schemes in the UAE with hundreds of winners and brand new cars to be won. The various promotions we organise through the year are in line with our efforts to reward our customers for the trust they have shown in us and for helping make Al Ansari Exchange one of the country’s foremost foreign exchange and money transfer companies. For the upcoming summer promotion, we are anticipating a greater number of entries given the overall increase in remittance transactions in recent months.”

The Al Ansari Rewards – Summer Promotion 2013 gives customers a chance to win cash vouchers and brand new cars when they transact at any Al Ansari Exchange branch across the UAE. Each transaction, including bill payments, credit card encashment, international mobile top-up, investment and saving schemes, loyalty programs, e-exchange, payroll solutions, corporate cash collection services, remittance and foreign exchange services, is automatically entered into the raffle draw, which will be held under the supervision of the Department of Economic Development in Dubai.