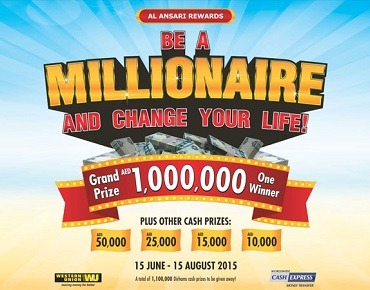 Al Ansari Exchange, the UAE-based foreign exchange and worldwide money transfer company, has announced the launch of its much-awaited Summer Promotion 2015, with a grand prize of AED 1 million for the second consecutive year. The two-month long promotion will run from June 15 to August 15, 2015 under the theme ‘Be a Millionaire and Change Your Life’. The draw for the Grand Prize will take place on August 31, 2015 and a Millionaire will be announced.

The latest edition of the annual feature of Al Ansari Exchange’s comprehensive promotional activities, Summer Promotion 2015 will have additional prizes of AED 50,000, AED 25,000, AED 15,000, and AED 10,000 for other lucky winners. All eligible transactions made during the period of the draw, including Money Transfers, Purchase of Foreign Exchange or National Bonds, Air Ticket Payment for Air Arabia or Fly Dubai, and Credit Card Encashment from any of the Al Ansari Exchange branches in the UAE will qualify for the raffle draw.

Rashed Ali Al Ansari, General Manager of Al Ansari Exchange, said: “The Summer Promotion is an annual reward offering from Al Ansari Exchange eagerly awaited by our customers because of its life-changing effects on the lives of the winners. We are delighted to announce our Summer Promotion 2015 with a Grand Prize of AED 1 million as part of our commitment to offer extra rewards and added benefits to our loyal customers who have contributed towards the company’s growth and expansion. Like in previous years, we again expect strong participation from the people of the UAE because of the promotion’s attractive value proposition.”