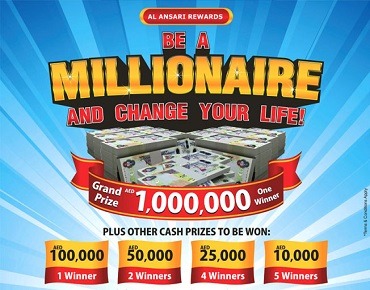 Al Ansari Exchange, the UAE-based foreign exchange and worldwide money transfer company, has announced the launch of ‘Al Ansari Rewards – Summer Promotion 2014,’ offering at total of AED 1,350,000 in cash prizes. In which one lucky customer will win AED 1,000,000 as the Grand Prize in addition to other exciting cash prizes during the two month-long promotion, which will run from July 1 to August 31, 2014.

During the period of promotion, all transactions for money transfers, foreign exchange above AED 1,000, purchase of National Bond above AED 1,000, payments made for air tickets for Air Arabia and Fly Dubai, and Credit Card Encashment from any of the Al Ansari Exchange branches in the UAE will automatically qualify for a raffle draw. The Grand Draw for Al Ansari Rewards – Summer Promotion 2014 will take place on September 17, 2014 in Abu Dhabi and September 21, 2014 in Dubai.

Bassel El Bakkar, Marketing Manager, Al Ansari Exchange, said: “Al Ansari Exchange has once again come up with an exciting reward scheme for its customers in the UAE that will give them the chance to become a millionaire and change their life forever. ‘Al Ansari Rewards – Summer Promotion 2014’ that was planned more than six months ago, is aligned with our strategy to offer our valued customers with maximum benefits for their loyalty, which has helped us achieve tremendous growth and success. The prizes were redistributed based on a study focusing on our loyal customers’ needs and satisfcation. The hard work and good planning gives us the confidence to expect a greater response from our loyal customers in the number of entries from the previous years as this year’s edition offers even greater value in terms of worth of prize money.”