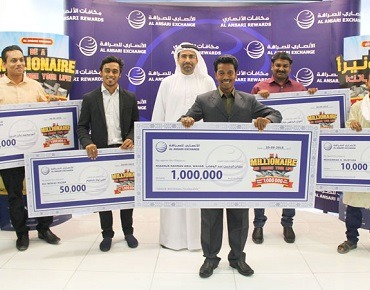 In line with its commitment to making a positive change in the lives of its customers, Al Ansari Exchange, the UAE-based foreign exchange and worldwide money transfer company, presented the Grand Prize of AED 1 million to the lucky winner of Al Ansari Exchange Summer Promotion 2015.

Organised under the theme ‘Be a Millionaire and Change Your Life,’ the promotion was a turning point in the life of Mizanur Rahman Abdul Wahab from Bangladesh, a worker in a livestock farm in Abu Dhabi, who won the Grand Prize after sending AED 1,039 to his family in his hometown. The 37-year old Mizanur Rahman received the good news with mixed feelings of surprise and happiness. He had never imagined that he would realise his dreams of building a new house and starting his own business after working in the same field for more than 20 years on a limited monthly salary.

“Our heartly congratulations to Mizanur Rahman Abdul Wahab on being a millionaire with us and changing his life” said Rashed Ali Al Ansari, General Manager, Al Ansari Exchange. “The overwhelming success of Al Ansari Exchange Summer Promotion 2015, which saw great response for its positive role in changing lives, urges us to continue to offer the best promotions and valuable prizes to our customers in appreciation of their continuous support and effective contributions as real partners in boosting Al Ansari Exchange’s growth and leading position across the UAE.”

Mizanur Rahman Abdul Wahab admitted that he never expected that sending money to his family in Bangladesh would offer him a golden opportunity to radically change his life. “I thank Al Ansari Exchange for helping me achieve my dreams of building new house and securing better future for my family and six sisters. I want to provide good education for my children and look forward to investing this money in establishing a private business that would help make a positive change in the lives of many youngsters in my hometown in Bangladesh. I also plan to buy a car in order to be able to visit new places across the country,” said Abdul Wahab.

Other winners were also awarded with the additional prizes of AED 50,000, AED 25,000, AED 15,000, and AED 10,000. All customers who made eligible transactions during the two-month long promotion – which ran from June 15, 2015 to August 15, 2015 – were qualified for the raffle draw. The transactions included Money Transfers, Purchase of Foreign Exchange, National Bonds, Air Ticket Payment for Air Arabia or Fly Dubai, and Credit Card Encashment from any of the Al Ansari Exchange branches in the UAE.