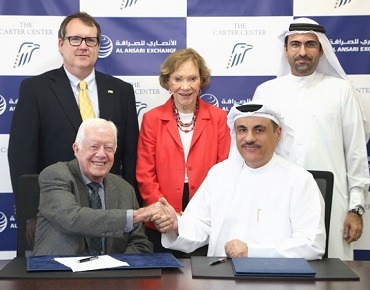 Al Ansari Exchange, the UAE-based company that provides worldwide remittance and foreign exchange services, and The Carter Center, a non-for-profit organization that aims to fight disease, wage peace, and build hope around the world, has announced a partnership to help eradicate and eliminate diseases which will affect tens of thousands of poverty stricken people in developing countries. As part of the agreement, Al Ansari Exchange has committed USD 1 million to the Center in its fight against these major health priorities. The agreement was jointly signed by former U.S. President Jimmy Carter, founder of The Carter Center, and Mohamed A. Al Ansari, Chairman of Al Ansari Exchange last Saturday 28th March 2015 in Al Ansari Exchange Headquarters.

“Al Ansari Exchange’s generous contribution further demonstrates the Ansari Family’s global health leadership and the overall spirit of international commitment to ensure that all people are free from preventable diseases, such as Guinea worm disease” said the former U.S. President Jimmy Carter, founder of The Carter Center, which since 1986 has led the international campaign to eradicate the second human disease, after smallpox.

Mohamed A. Al Ansari, Chairman of Al Ansari Exchange, said: “It is very distressing to know that a number of lives are severely impacted every year as a result of communicable diseases. The occurrence of these illnesses can be reduced significantly through drug administration, public health training, and improved sanitation conditions, especially to the deprived people in the world. Al Ansari Exchange has collaborated with The Carter Center in support of their efforts towards remedying these health concerns by donating USD 1 million. The move is in line with our corporate social responsibility (CSR) which we consider an integral component of our business model. We are optimistic that this support will benefit thousands of underprivileged people all over the world who continue to live in unhealthy conditions and do not have access to even essential preventative medical treatments.”

The Carter Center seeks to improve health amongst other noble and charitable causes. A leader in the eradication and elimination of diseases, the Center mainly fights six preventable diseases – Guinea worm, river blindness, trachoma, schistosomiasis, lymphatic filariasis, and malaria in Hispaniola – by using health education and simple, low-cost methods. The Center also strives to improve access to mental health care.

Al Ansari Exchange is firmly committed to various community-oriented causes as part of their CSR activities. In the past, it has partnered with the Bill & Melinda Gates Foundation to support the eradication of polio and treatment and the prevention of neglected tropical diseases through a joint commitment of USD 10 million, with each side committing to provide half of that amount. In addition, Al Ansari Exchange has donated USD 2.7 million to Dubai Cares, a philanthropic organization working to provide quality primary education in developing countries, over a period of five years until 2017 to ensure quality education to children regardless of their gender, ethnicity or religion.