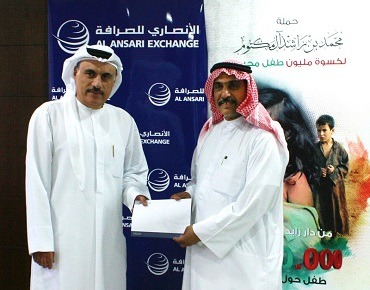 Mohammad Ali Al Ansari, Chairman and Managing Director, Al Ansari Exchange, said: “Sheikh Mohammed Bin Rashid Al Maktoum’s initiative shows how Emiratis are people of charity and goodwill, inspired by their fathers and ancestors and guided by the late Sheikh Zayed Bin Sultan Al Nahyan to ensure growth and prosperity of the community. We are proud of the efforts of H.H. Sheikh Mohammed Bin Rashid Al Maktoum who is renowned for his humanitarian and charitable initiatives, such as his latest humanitarian campaign reflecting the true spirit of the Holy Month of Ramadan and commemorates the ‘Emirati Humanitarian Work Day’ on the 19th day of Ramadan that also marks the death anniversary of late Sheikh Zayed Bin Sultan Al Nahyan.”

“Through our donation we hope to contribute in some way in providing clothing to the needy children who face harsh living conditions across the world,” Al Ansari concluded.