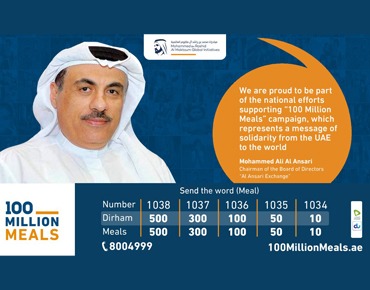 Al Ansari Exchange, the UAE-based foreign exchange and worldwide money transfer company, donated AED 1 million to the ‘100 Million Meals’ campaign, the largest food drive of its kind in the Arab world, that aims to provide food parcels to empower disadvantaged individuals and families across 20 countries in the Middle East, Asia and Africa to prepare their own meals during the Holy Month of Ramadan.

Mohamed A. Al Ansari, Chairman of Al Ansari Exchange, said, “We are honored to be part of the national efforts aimed at making the ‘100 Million Meals’ campaign a success.  This campaign represents a message of love and solidarity from the UAE to the world.”

“We look forward to playing an integral role in translating the ambitious goals of the initiative by raising adequate donations to tackle hunger, regionally, and to provide 100 million meals or equivalent food support to the less fortunate individuals and families. The campaign aligns with our commitment towards our social, national and humanitarian responsibilities, supporting the leadership’s direction to lead the map of charitable work and humanitarian giving.” he added.

Al Ansari Exchange has launched a series of charitable and social initiatives and programs in vital sectors such as education, health and others. The company continues its support for humanitarian initiatives and efforts with an aim to alleviate the impact of natural disasters on communities, in cooperation with governments in many regions around the world.