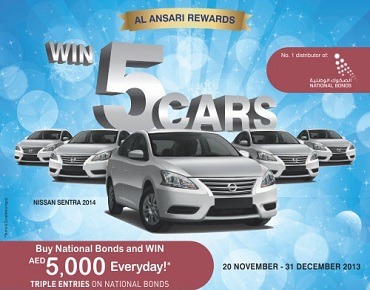 Al Ansari Exchange, the UAE-based foreign exchange and worldwide money transfer company, has announced the winners of its ‘Al Ansari Rewards – Winter Promotion 2013’ during a grand raffle draw held recently at Sharjah Mega Mall. Winners of 2014 model Nissan Sentra cars and 45 National Bonds saving certificates worth AED 5,000 each were announced during the draw.

The majority of winners were UAE Nationals who received seven prizes, while Arab nationals received 18 prizes. There were also 11 winners from India and Pakistan and 6 winners from other countries.

Rashed Ali Al Ansari, General Manager, Al Ansari Exchange, said: “As part of our strategy to increase customer loyalty and reward our loyal customers, we launched the ‘Al Ansari Rewards – Winter Promotion 2013.’ This is a highly anticipated event eagerly awaited by our customers across the UAE and is the fruit of our partnership with National Bonds Corporations. This campaign along with others launched by Al Ansari Exchange in the past reflects our efforts to provide our customers with more than comprehensive foreign exchange and worldwide money transfer services. On this occasion, I would like to congratulate the winners of our latest promotion.”

The ‘Al Ansari Rewards – Winter Promotion 2013’ ran from November 20 to December 31, 2013, and automatically included all transactions done at Al Ansari Exchange’s network of branches across the UAE except Received Transactions, Salaries Received through the Wage Protection System (WPS), Void or Returned Transactions, and Foreign Transactions below AED 3,000.