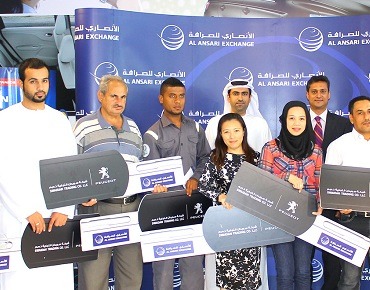 Al Ansari Exchange, a UAE-based foreign exchange and worldwide money transfer company, has concluded ‘Al Ansari Rewards – Summer Promotion 2013’ with the awarding of a total of AED 2 million worth of cash plus 10 brand new cars. The AED 2 million worth of cash prizes was divided among 200 lucky winners, while 10 Al Ansari Exchange patrons received their new Peugeot 301 sedans at an awarding ceremony held at the Swaidan Trading showroom in Dubai.

Rashed Ali Al Ansari, General Manager, Al Ansari Exchange, said, “Our summer promo, one of Al Ansari Exchange’s most anticipated yearly events, gives us great pride and satisfaction as it enables us to reward the loyalty and support of all our valued customers. Our partners deserve a lot of credit for the huge response to this year’s campaign as they helped generate great excitement and enthusiastic participation. We shall continue to launch more of such programs that give back to our valued customers who form the core and inspiration of our business.”

As this promotion was rolled out during Ramadan period, the sense of fulfillment to take part in Al Ansari Exchange program is very high. This gave us the chance to do something special for people who work hard to provide for their families. Thanks to Al Ansari Rewards Summer Promotion. Seeing the look of happiness and gratitude on the winners was a great reward for us at Swaidan Trading as well. We thank Mr. Rashed Ali Al Ansari for making us part of this promotion and we look forward to supporting such initiatives from Al Ansari Exchange in the future also,” added Neeraj Mahajan, CEO, Al Naboodah Commercial Group – distributor of Peugeot in Dubai & Northern Emirates through its subsidiary Swaidan Trading Co. LLC

Emerging as the biggest winner of the promo was Aashish Krishnan, an Indian national who won his car by making a transaction of just AED 335. “I could not believe my luck when I received a call saying that I had won a car. I really thank Al Ansari Exchange and Swaidan Trading for changing my life forever,” said an elated Krishnan.

The promo ran from July 1 to August 31, 2013 and automatically included all transactions done at Al Ansari Exchange’s network of branches across the UAE. Winners were picked via a grand raffle draw held on September 3, 2013, in Dubai supervised by the emirate’s Department of Economic Development. The summer bonanza was fully supported by Alawneh Exchange from Jordan, the National Bonds Corporation, and Swaidan Trading, the authorised distributor for Peugeot in Dubai and the Northern Emirates.