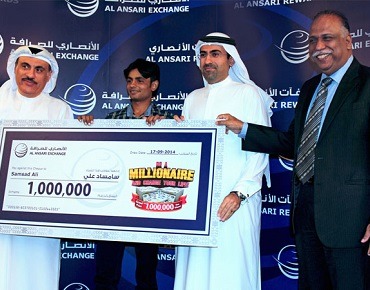 Al Ansari Exchange, the UAE-based foreign exchange and worldwide money transfer company, successfully concluded ‘Al Ansari Rewards – Summer Promotion 2014’ by awarding the Grand Prize of AED 1 million to Samsad Ali Rosan from India at a gala award ceremony held on September 27, 2014 at the Sheraton Dubai, Mall of the Emirates. A total of AED 1.35 million worth of cash prizes was given to 13 lucky customers during the promotion organized in partnership with the National Bonds Corporation which ran from July 1 to August 31, 2014.

Rashed Ali Al Ansari, General Manager, Al Ansari Exchange, said: “We are extremely delighted to conclude the highly successful ‘Al Ansari Rewards – Summer Promotion 2014,’ which has given away more than AED 1.35 million in prizes to 13 lucky customers. We congratulate our grand prize winner Samsad Ali Rosan who made a transaction worth AED 600 only from one of our branches to his family in India, which ended up winning him AED 1 Million in return and dramatically change his life for the better. In addition, we would like to congratulate the other 12 winners as well as thank all our customers for their overwhelming participation in this year’s Summer Promotion, ensuring its immense success; we wish them better luck in the next promotion.”

Samsad Ali Rosan said: “Winning a cash prize of AED 1 million is like a dream. I’m a worker in a small interior design company, drawing a meager salary of AED 1,100. I was extremely overjoyed upon receiving a call from Al Ansari Exchange, informing me about the Grand Prize. I consider this reward as an unexpected blessing and look forward to a new beginning with my family where we will be able to pursue and fulfill all our dreams and aspiration with the prize money. I cannot thank Al Ansari Exchange enough for changing my life forever.”