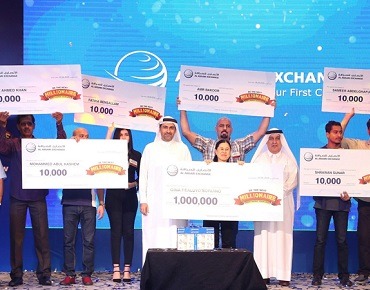 Al Ansari Exchange, the UAE-based foreign exchange and worldwide money transfer company, has announced that Gina Realuyo Soriano from Philippines is the fifth millionaire of its popular ‘Al Ansari Exchange Rewards – Summer Promotion. The name of Gina was picked during the draw held at the Metropolitan Hotel in Dubai. The single lucky winner of Mercedes Benz 2018 model was also revealed during the event along with the names of nine other individuals who won a cash prize of AED 10,000 each.

Gina, a house maid who has been in the UAE for 10 years now, was qualified to win the AED 1-million grand prize after transferring AED 1,695 to her family in Philippines via Al Ansari Exchange branch in Mall of the Emirates. She was selected from the nine finalists, namely: Rasheed Kunhammed of India; Sameer Abdelghafur of Jordan; Fatiha Bensallam of Morocco; Shrawan Sunar of Nepal; Amr Bakoor of Syria; Mohammed Abu Rahayan of Bangladesh; Azeez Ahmed Khan of India; and Honesto Dela Cruz Corpuz of Philippines. Each finalist was qualified to take home the AED 10,000 prize.

Rashid Ali Al Ansari, General Manager of Al Ansari Exchange, said: “We would like to congratulate Ms. Gina for winning the grand prize and becoming our fifth millionaire. We hope that the cash prize will make a positive difference in her life and her family’s life. We were also overwhelmed by the number of entries we received during this year’s promo and we deeply appreciate our customers’ patronage who made our summer promotion a true celebration of success for our winners and for the company. We cannot thank our customers enough for the continuous support and loyalty, which is why we look forward to work even more to deliver greater rewards in the upcoming editions.”

“I was very surprised to be this year’s millionaire. This is a life-changing event that will surely help me improve my life and realize all my dreams, including providing a decent life for my family,” said Gina. “Thank you, Al Ansari Exchange, for holding the promo yearly and appreciating us, your loyal customers. I invite all the customers to participate in the succeeding competitions so that they too will have a chance to win valuable prizes and change their lives for the better.”