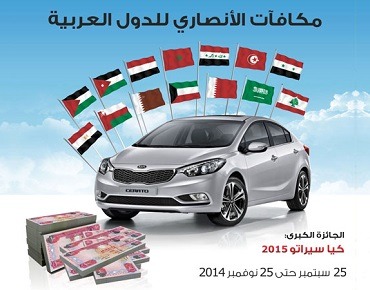 During the two-month long promotion, more than 100 customers will stand a chance to win over-the-counter cash prizes worth thousands of dirhams. Al Ansari Exchange will also present a 2015 Kia Cerato to one lucky winner. All money transfers to Arab countries will automatically qualify for the instant cash prizes and will be entered into the final draw for the grand prize.

Rashed Ali Al Ansari, General Manager, Al Ansari Exchange, said, “Al Ansari Exchange has a tradition of launching special promotions throughout the year for its valued customers for their continued loyalty. We believe that the trust and support of our customers has enabled us to register remarkable growth and performance over the years. Our latest rewards program for Arab countries is in line with our corporate strategy to extend extra benefits to them for availing our services. We are confident that this promotion will give our Arab customers more reasons to remit money to their home countries.”