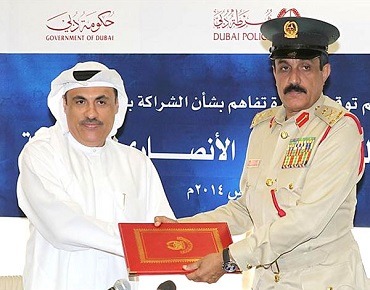 Al Ansari Exchange, a UAE-based foreign exchange and worldwide money transfer company, has signed a Memorandum of Understanding (MoU) with Dubai Police to help inmates of the Department of Correctional and Punitive Institutions. The agreement was signed by Major General Khamis Mattar Al Mazeina, Commander-in-Chief of Dubai Police and Mohammad Ali Al Ansari, Chairman and Managing Director of Al Ansari Exchange, in the presence of Major General Abdul Rahman Mohammed Rafi, Assistant Commander in Charge of Preparation and Community Service Affairs, and a group of senior officers and officials from both sides.

Major General Al Mazeina revealed that Al Ansari Exchange has pledged to provide financial support worth AED 5 million to the prisoners and their families in the next five years. This translates to AED 1 million cash donation yearly. Major General Al Mazeina commended the company for its contribution to the efforts towards achieving social solidarity as preached by Islam.

He added that, as part of its social responsibility, Dubai Police has been collaborating with various organizations to help support the detainees, most of whom are breadwinners, and their relatives who are in need of financial aid. Aside from financial support, the Dubai Police also aims to reform the prisoners to give them hope and encourage those who are convicted of misdemeanour assaults to take the right path.

Major General Al Mazeina highlighted the importance of social cooperation between government and private institutions to support the inmates’ rehabilitation through aftercare and training. This is in line with the punitive and reformatory institutions’ goal to rehabilitate and reintegrate the prisoners into society, while affording their families with necessary protection from undue pressure and judgment. Major General Al Mazeina described the families as ‘victims with no guilt.’

For his part, Mohammed Ali Al Ansari, Chairman and Managing Director of Al Ansari Exchange, said: “This initiative is part of the company’s policy to support all segments of society and reinforce humanitarian and social works by helping inmates of the Department of Correctional and Punitive Institutions who face difficulties in fulfilling their financial commitments and collecting blood money. We aim to consolidate our strategic partnerships with all government entities in Dubai. We also thank Dubai Police’s Humanitarian Care Section for their cooperation and efforts to open new channels of hope for inmates and help them overcome their financial problems.”